On 24th July, Google confirmed via the Chrome Developers twitter account and Google blog post that any site not encrypted with HTTPS will be marked as “not secure”.

Google’s efforts to create a safer browsing experience for users have been extremely successful so far, with roughly 83% of the top 100 sites on the web now using HTTPS, up from 37% just two years prior.

The next step in Google’s campaign will come in October 2018, with plans to implement a red “not” secure warning when users enter data on any unencrypted page, which will be accompanied by the removal of the “secure” tag from HTTPS pages.

In July Google announced support for the Speakable Schema.org property which can be used to identify sections within a webpage that are suited best for text-to-speech. This schema is currently in beta and is limited to valid news sites, and is also only available on Google Home devices for English speakers with the U.S.

The content guidelines from Google recommend that data is structured in the following ways when writing content for Speakable:

Although currently limited to valid news sites it’s expected that the mark-up will become available for all sites in the near future, allowing businesses to ensure that their site is primed for the increasing use of voice search.

Google released an updated edition of the search quality rating guidelines on 20th July. The extensive, 164 page PDF document provides a full guide for Google’s 10,000+ quality raters worldwide to adhere to.These raters evaluate and rate the quality of pages that appear in the top results on SERPs for lists of searches they are contracted to perform.

In this update of the search quality guidelines Google place more focus on the importance of the “beneficial purpose” of webpages, with a particular emphasis on flagging clickbait, fake news, conspiracy theories and pages which spread hate as low quality. Google has also placed a new focus on the authors of content, with quality raters required to research, evaluate and factor in the reputation of authors when rating a website or webpage.

On August 1st Google released a new update to their broad core algorithm. Unlike Google’s “focused updates”, which are daily changes designed to focus on specific objectives like site speed or security, the broad core update is a more general widespread change to the algorithm, and is confirmed to be rolling out globally.

This week we released a broad core algorithm update, as we do several times per year. Our guidance about such updates remains the same as in March, as we covered here: https://t.co/uPlEdSLHoX

On Twitter, Google’s Danny Sullivan provided some clarification on the purpose of the update but ultimately confirmed that from an SEO perspective, there is no specific ‘fix’ for any traffic fluctuations this may cause.

We tell lots of things to do. Improve site speed. Consider secure. Etc. But that's not what this update was about. It's broad. And respectfully, I think telling people there's no particular thing to "fix" is indeed helpful. It means, hopefully, they think more broadly…

Instead, Google has continued to place emphasis on the importance of “high quality content”, suggesting that SEOs take a “broad” approach to improvement that considers factors laid out within the official search quality rater guidelines.

Google states that it will continue to release core algorithm updates several times a year, to further tailor the SERPs towards their ideology of sites that provide the best user experience based on the request of the user.

On 31st July, Google released a blog post announcing its support for the dataset schema, making it possible for websites to display charts, tables or data directly within search results.

Within the blog, Google informed that “news organisations that publish data in the form of tables can add additional structured data to make the dataset parts of the page easier to identify for use in relevant search features”.

The below is an example from Google of what the dataset schema looks like: 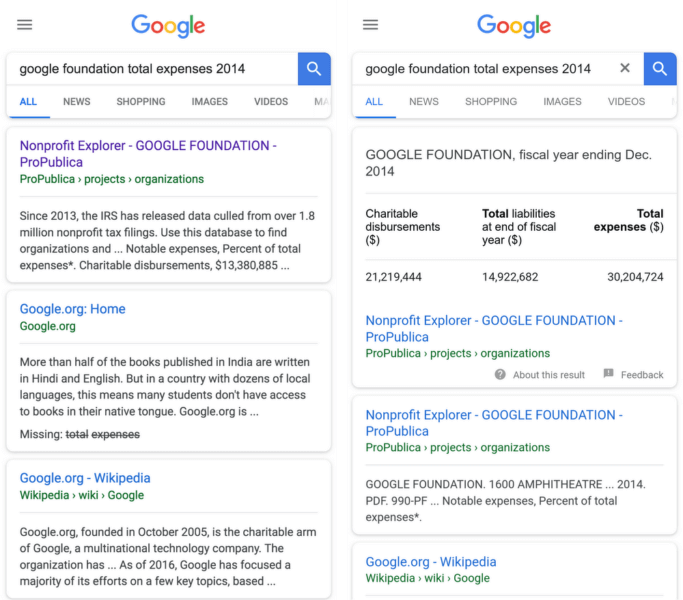 Google explain that the purpose of this mark-up is to improve discovery of datasets from fields such as life sciences, social sciences, machine learning, civic and government data and more. Google states that the below site features can qualify as a dataset:

Following the initial announcement of 17th January 2018, Google confirmed via the Google Webmasters twitter account on 9th July that the page speed update was being rolled out.

Google states the update will only impact mobile rankings on what it considers to be a small percentage of the slowest websites on the internet.

Page speed has been an important optimisation factor within Google’s search results on desktop for years, with conclusive evidence from studies conducted by Google confirming that users find page speed as important on mobile. Alongside the move to mobile first indexing, the update reflects Google’s continuing focus on maximising user experience for mobile searchers.

In early July Aleyda Solis, founder of Search Engine Land, discovered that Google had quietly updated their official documentation on hreflang usage to expand on existing guidelines and resources.

If a site has multiple versions of a page for different languages or regions, using hreflang code will help Google point users to the most appropriate version of the page by language or region.

In the new documentation, Google recommends indicating alternate pages for the following scenarios: