Necessary cookies enable core functionality such as security, network management, and accessibility. You may disable these by changing your browser settings, but this may affect how the website functions

Though Instagram’s starred in marketing news repeatedly in recent weeks, with a host of updates that we covered in our last blog post, there have also been significant changes on many of the Internet’s other leading social media channels.

Read on as we round up several of the biggest social platform updates in recent weeks, with analysis of its impact on the industry.

Facebook cracks down on sensationalist headlines – and you won’t BELIEVE the reasons why!

Well, actually, the reasons why probably won’t shock you. In fact, this is exactly the type of rhetorical grandiosity that Facebook’s looking to crack down on with its new ad policy, which is set to penalise click-bait ads which sensationalise their content or omit meaningful details in order to manipulatively improve click-through-rate, Marketing Land reports.

Facebook’s stance follows a new policy announcement in May 2017, that they would be implementing steps to minimise the impact – and reach – of disruptive, malicious or sensationalist posts.

As an indication of the new policy in action, Facebook has already removed more than eight-hundred pages in recent weeks that consistently misled users with overly-dramatic and disingenuous headlines.

While the vast majority of these pages were political in kind, the policy change will have ramifications for digital marketers, who’ll need to ensure that their posts aren’t withholding key information purely to bait site sessions out of users. And though we certainly won’t be posting this to social with the promise that it’ll change your understanding of the industry FOREVER, we hope you’ll get something out of it, anyway.

Pinterest revamps Ads Manager for the first time since 2016

In recent years, Pinterest has slowly but surely picked up the pace as a content curation channel of choice for aesthetically-minded users the world over.

To capitalise on its audience’s size and its unprecedented reach, the channel has updated its ads system for the first time in two years – in fact, since its inception – with the addition of a host of new features that make it a more viable option for marketers than ever before.

To kick things off, Pinterest has given its Ads Manager a considerable overhaul. A campaign set-up wizard is now available to help users create and optimise campaigns – which will be particularly beneficial to first-time marketers exploring the channel’s merits to their brands. Optimisation options include setting campaign goals, choosing specific audience targeting, and determining the exact Pins that are to be promoted within the feed or search results.

Pinterest has also redesigned its Shoppable Pins, introducing reactive stock controls and dynamic pricing, and allowed greater numbers of pins to use the shopping bag feature, which lets users click-through directly from the Pinterest Shoppable ad to the checkout on the native site. For e-commerce brands in particular, this is something to be sure to look into.

We’re always interested to see new channels taking strides to allow users to more easily see and purchase the products they love. In coming months, we’re keen to see how the channel develops!

Healthy social media usage has been frequently in the news in recent months, with several channels taking steps to increase and safeguard its users’ well-being, such as Instagram’s introduction of an anti-bully filter to its ‘You’re all caught up’ indicator, encouraging users to be mindful of listlessly scrolling through photos they’ve already seen.

In a new and intriguing development, researchers from the University of Pennsylvania – and the World Well-Being Project – have created an algorithm that’s able to trawl through users’ Facebook posts and, from their choice of language and manner of expression, identify whether they could be at risk of any mental health problems.

With surprisingly similar methods to those used in genomics, we can comb social media data to find these markers.

Depression appears to be something quite detectable in this way; it really changes people’s use of social media in a way that something like skin disease or diabetes doesn’t.

The hope is that one day, these screening systems can be integrated into systems of care’.

If social could unobtrusively keep an eye out for its users’ mental well-being, then this is just another way that channels could take strides to look after the health of users online.

Currently, when you report a tweet, what happens next is a little unclear. You aren’t notified if the tweet – or the tweeter – is penalised, and the tweets remain visible in your feed, despite the fact you’ve shown you think it shouldn’t be there.

Twitter’s acknowledged the issue and, in response, is introducing new measures that will make it much more apparent when they’re taking action, and why they’re doing so.

Moving forward, when Twitter deletes a reported tweet, they’ll indicate it on the user’s timeline by showing a warning in place of the now-removed message. This will include a link through to the Twitter rules, explaining how the removed content violated terms of service: 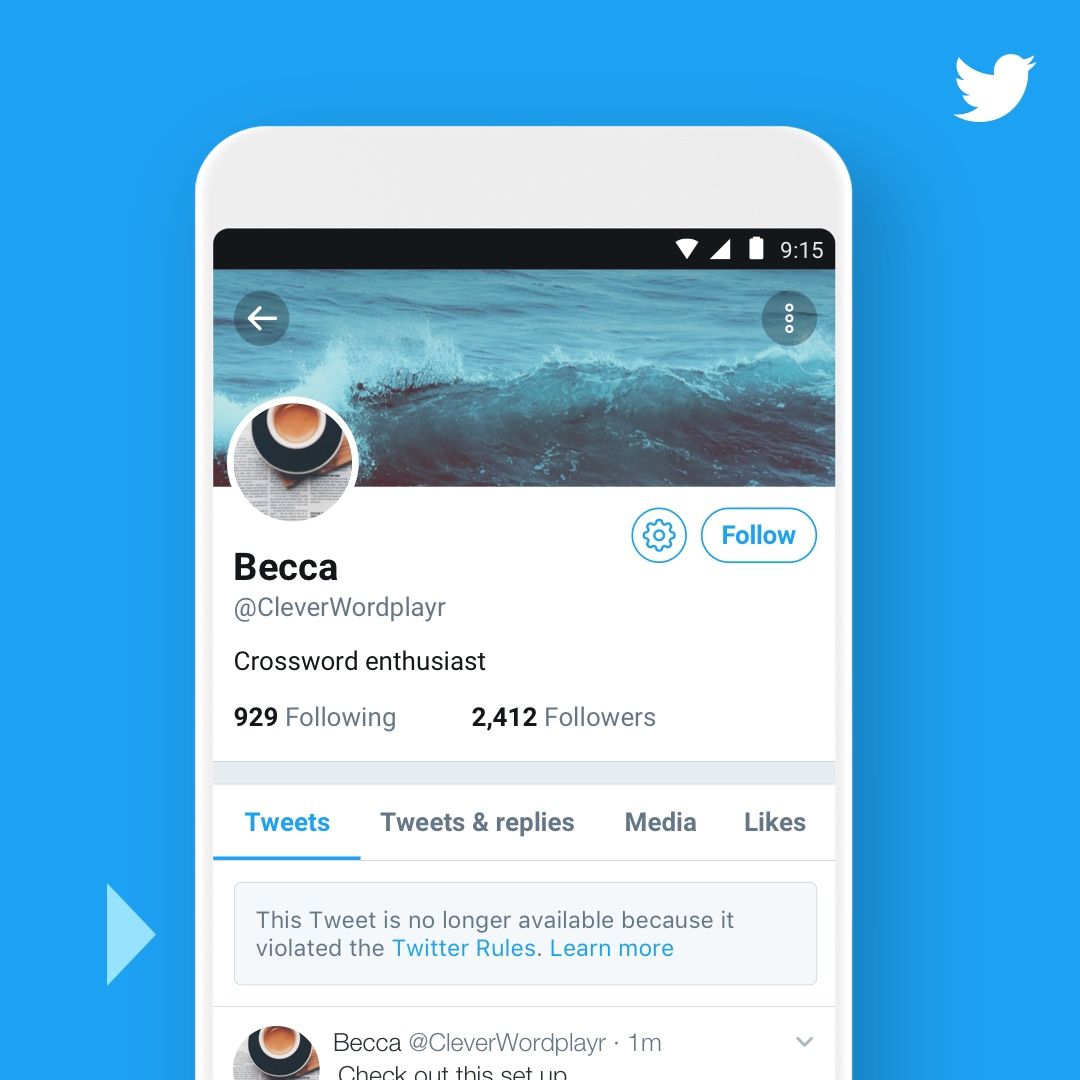 Additionally, any tweet you report – regardless of whether Twitter takes action or not – will also be hidden from your timeline and replaced with a placeholder: 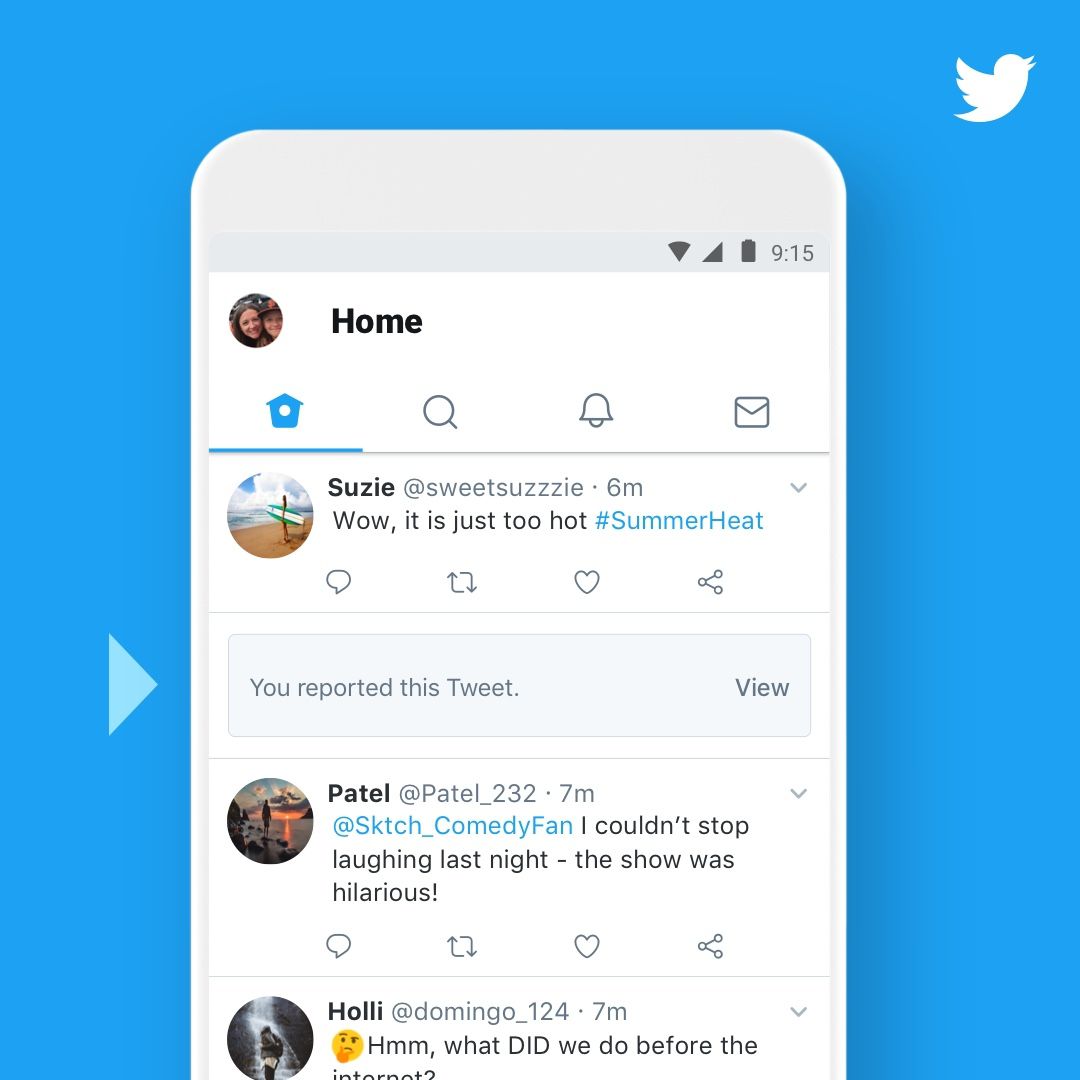 It’s interesting to see Twitter taking greater strides to improve its transparency, and we wonder whether this will roll out onto other channels in the future.

That’s all for this month, folks! We’ll be back next month with a round-up of all the most significant changes on social.