With Google I/O having taken place from May 7th-9th, we were treated to several announcements on features that have been and are due to be released for Google search, these include:

We will dive further into these new features below.

Despite these major updates in Googlebot’s ability to render JavaScript, any JavaScript on a page is still only rendered on Googlebot’s 2nd crawl of the page, meaning that there is still a delay to Google indexing JavaScript content.

FAQ schema can be applied to pages that contains a list of questions and answers around a specific topic. This is unlike QAPage schema, which is relevant for pages that allow users to submit answers to a single question, such as forums. 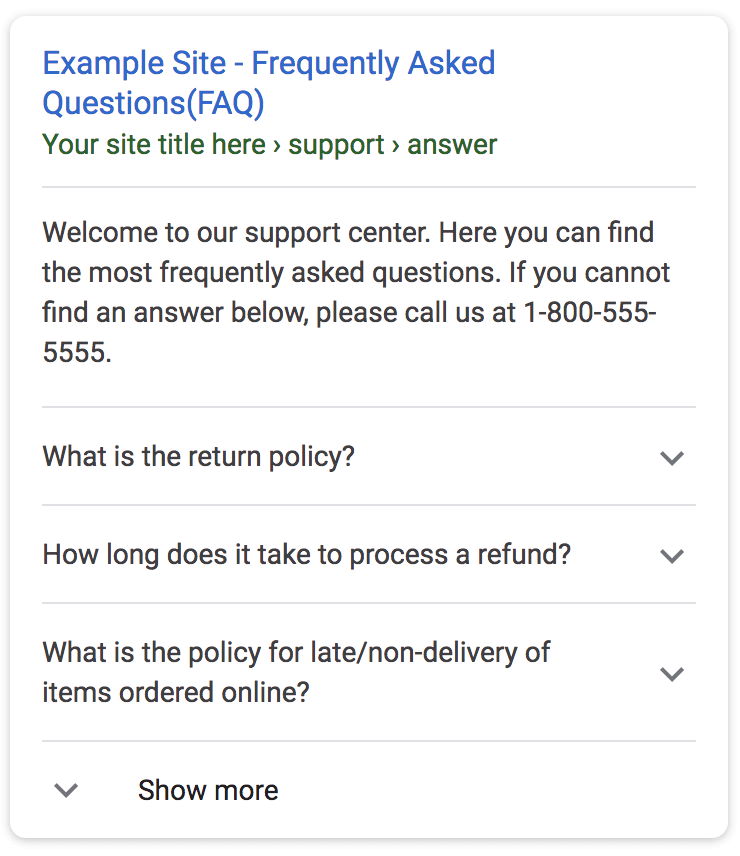 How-To Schema can be applied to pages that provide step-by-step instructions in order to complete a task, such as “how to tie a tie”. For any instructions for food and drink related topics, ensure that the Recipe Schema is used instead.

How-To Schema can be displayed in a standard and an image rich result within Google SERPs. 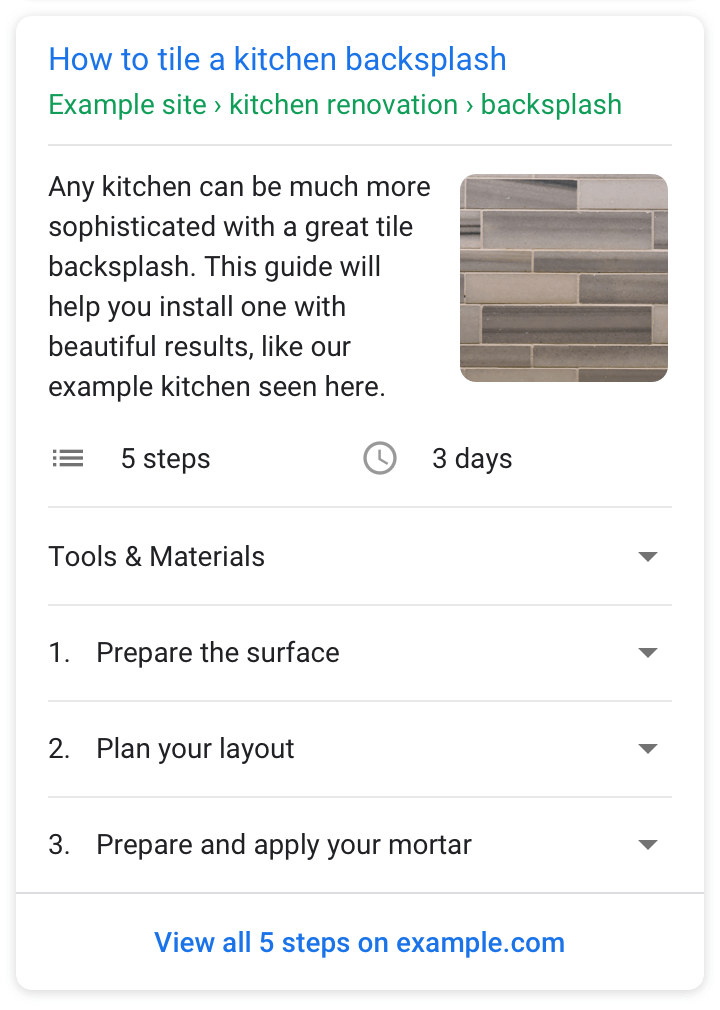 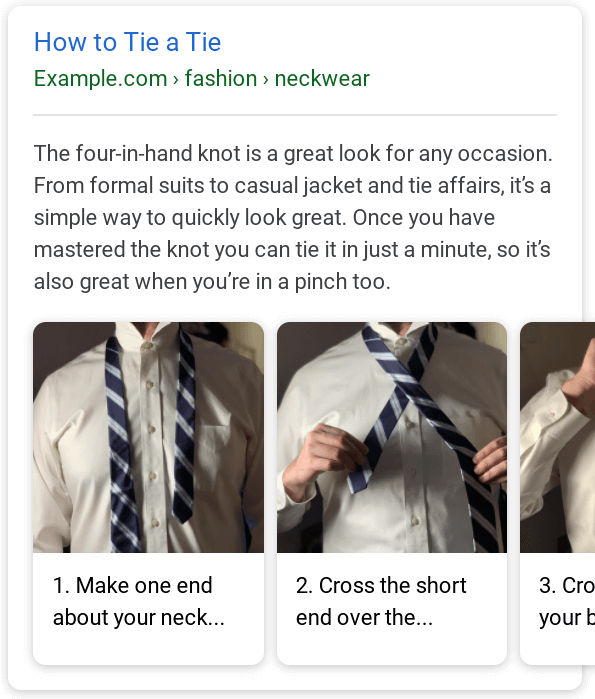 Ensure that any pages with How-To Schema implemented comply with the content guidelines provided within Google’s How-To Schema help page.

Announced at Google I/O, podcasts will be shown within search. Google have informed that they will be able to transcribe and index a podcast’s content in order to display results for relevant searches, rather than relying on the podcast title to display the contents of the podcast. Podcasts will also be displayed within Google’s “full coverage” segment, which previously displayed within Google News, will now be able to display within SERPs. 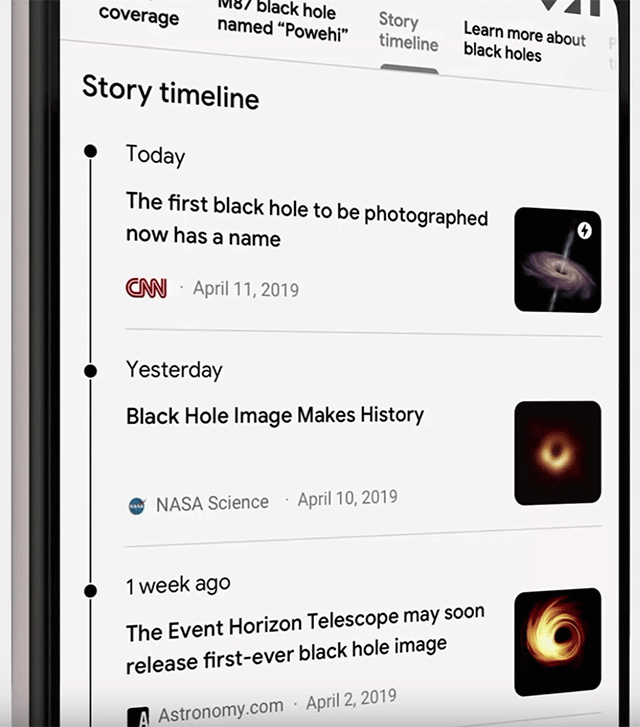 Full coverage displays a large range of information on a searched topic, such as top stories, videos, informational pages, podcasts and related queries.

Currently only available on Google Pixel smartphones, Google Maps now has the ability to enter AR mode, which will allow people to receive directions through their camera.

With this feature being especially useful for anyone visiting a city and trying to locate local restaurants, business and points of interest, it is becoming more of a priority to ensure that any bricks and mortar stores have been added to Google My Business and the location pins are accurate.

As an addition to this, Google Maps will support incognito mode, allowing users to hide their activity, such as places searched or directions used. Google have also been testing branded pins within Google Maps. 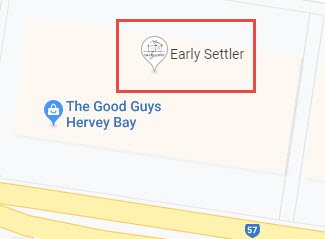 No announcement has yet been made in regards to how these will be implemented.

Google have released several features for Google Lens, most of which are focused on restaurants. Google Lens will now have the ability to recommend popular dishes and also find reviews on specific dishes on a menu by pulling information from Google Maps information.

Google have updated the search quality raters guidelines in order to expand and modernise a couple of points, mainly surrounding E-A-T and interstitials. In regards to the changes mate to E-A-T (Expertise, Authoritativeness and Trustworthiness), Google have added emphasis to focusing on page quality over E-A-T on non-YMYL (Your Money or Your Life) pages and also that everyday expertise can be assessed based on the talent/skill level depicted in cases where the content creator is demonstrating formal or everyday expertise but is not doing any harm.

Google have also added further information on how to deal with interstitials and have now been included within segments discussing that if these are to be used, they should be clear with easy-to-close buttons.

GOOGLE MAKES MOBILE-FIRST INDEXING A DEFAULT FOR ALL NEW SITES

Google have announced, via their webmaster central blog, that commencing 1st July, all new and previously unknown sites will have mobile-first indexing enabled as a default. 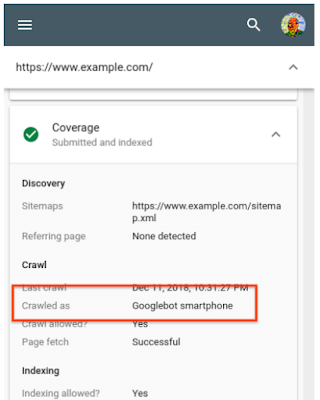 As shown above, users will be able to check for mobile-first indexing by using the URL inspection tool within Google Search Console.

Tomorrow, we are releasing a broad core algorithm update, as we do several times per year. It is called the June 2019 Core Update. Our guidance about such updates remains as we’ve covered before. Please see this tweet for more about that:https://t.co/tmfQkhdjPL

Announced on The Keyword, Google released a new design on their search result pages. Within the redesign, Google have added favicons to Google search results.

Along with the addition of favicons, Google has also redesigned how ads will be displayed within SERPs and have received criticism in regards to ads and organic results with favicons looking very similar.