Join Fusion’s content team as they take to the stars for an in-depth look at one of social media’s most surreal but successful brands: American marshmallow-cookie makers, MoonPie.

As in our analysis of Spotify’s 2017 Wrapped, we’ll explore how the MoonPie cookie crumbles and highlights the lessons that other brands can use to inform their own approach to social media success.

How does MoonPie work?

MoonPie’s Twitter – as comic as it is cosmic – is truly a channel of the third kind, a meteor shower of eclectic jokes, sassy asides and graphics cooked up in an MS Paint rush. It’s not every day you see a brand complimenting another brand’s looks, literally talking about being a brand, or repeatedly sending semi-ridiculous questions to @NASA:

Parents, talk to your teens about MoonPie
Ask them why they are sending me DMs asking me to prom
Is this something you are comfortable with
Please ask them

.@Wendys I think you are very pretty

Meanwhile, whenever a user sends in something strange, the account’s more than happy to get even stranger back (and regularly does so late into the night). The brand’s commitment to its zany sense of humour and meme-based jokes, which are incredibly popular with today’s social media users, is absolutely unwavering, and departs substantially from how we might ordinarily expect a brand on social to be.

However, hundreds of thousands of likes, retweets and followers later, it’s clear that today’s digital audience has embraced MoonPie’s quirkiness like no other. One particular tweet coinciding with last year’s solar eclipse gained over 500,000 likes and almost 200,000 retweets:

It’s more than apparent, too, that social success has seen sales soar astronomically. Maseena Ziegler for Forbes wrote that, following August 2017’s viral tweet, US ‘demand for the product […] exceeded production capacity for the first time in decades’. Soon after, in September 2017, MoonPie’s sales hit the highest on record in the company’s one-hundred-year history.

When scrolling through MoonPie’s Twitter feed, it’d be easy to perceive all this success as being purely aleatory, as if they piloted their account bravely into the void – leaving strategy and ground control in the dust – only to emerge from a black hole with a winning formula completely by chance. And yet this would also be considerably short-sighted, for although MoonPie’s creators have said in interview that they’ve certainly required more creative freedom than usual to deliver their creative vision in full, the channel’s success is a consequence of exceptional strategic thinking which takes many cues from traditional advertising best practice.

David Ogilvy, one of advertising’s all-time greats, famously said that ‘if you’re trying to persuade people to do something, or buy something, it seems to me you should use their language, the language they use every day, the language in which they think’. If you apply this filter to MoonPie, it becomes apparent that their decisions surrounding tone of voice, engagement and creative quality signify a masterful use of the ‘language in which [its target audience] thinks’. By getting weird on social, following in the footsteps of its target audience (young social media users), and posting high quality creative that’s as fun as anything anyone will find elsewhere on their feed, all sense of the MoonPie Twitter belonging to a brand vanishes, becoming eclipsed by the sheer emotional response that the brand elicits – namely, laughter and joy. Ultimately, the channel leaves its visitors forgetting that they were ever looking at a branded channel in the first place, that the channel’s goal is to promote MoonPie and its products. I don’t think we could put it much better than MoonPie do themselves: 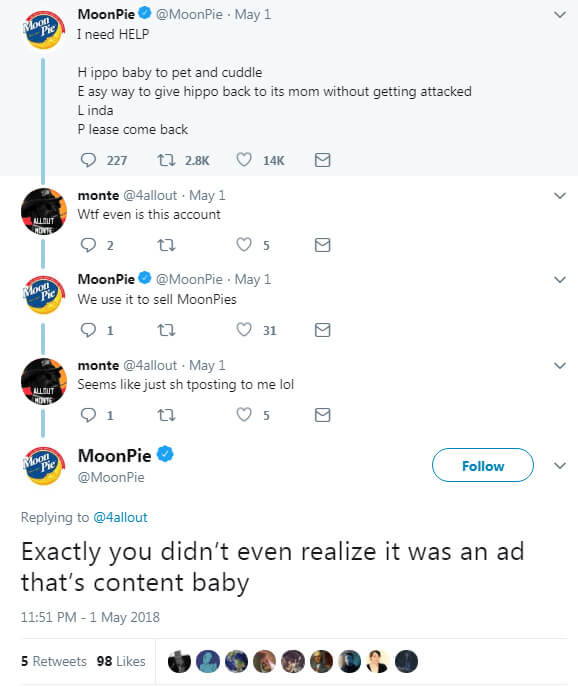 Evolving from heritage to challenger through social

MoonPie’s weirdness is a bold new outlook for a brand that’s been around for over a hundred years. Its appeal was its heritage – think Wagon Wheels in the UK – and its target audience a relatively older purchasing demographic. Needless to say, MoonPie certainly hasn’t always felt at home firing strange clapbacks at strangers across the Internet.

From our point of view, what’s so remarkable about the way the brand has revitalised itself in recent years is that its new-found success was so heavily reliant on its social media strategy. Twitter let MoonPie come to life, express a personality that resonated with a new audience, and flourish. The MoonPie Twitter, in this way, is a real testament to the transformative opportunities that social offers, that, when utilised well, can truly bring brands to life.

Thoughts to take away

• Use social to its full potential, to make your brand a personality.

• Think about what your target-audience values and shape your content to their perspective. This doesn’t mean you need to become as surreal as MoonPie; to the contrary, there are many ways this might be achieved.

• Embrace change – as MoonPie has shown, thinking outside the box for your strategy can be incredibly rewarding.

• And once you start something, commit to it – users value consistency and they’ll be more likely to follow an account when they’re confident about what they’re going to be served!