Google confirmed via the Google SearchLiaison Twitter account that a broad algorithm update went out in the month of April:

On Monday, we released a broad core algorithm update, as we routinely do throughout the year. For background and advice about these, see our tweet from last month: https://t.co/uPlEdSu6xp

This follows on from another broad update that went in last month. Google followed up this tweet by saying that there is no way to fix pages that may have lost performance from this update, but to instead keep on building good content.

The fluctuations from the update in search results lasted more than 10 days, appearing to begin on 17 April. Because this was a core update, it was not given an identifiable name and does not appear to target anything in particular.

Google replaces pagination with a “More results” button on mobile

Google have launched a change to their pagination on iOS and Android devices. Next and previous buttons have been replaced with a single “More results” button.

Instead of taking the user to a new page, the new feature loads the next set of results directly below the current set. When ads are loaded, these get inserted where the top of the next page would previously have been.

There have been mixed reactions to this change. Some SEOs said that this new functionality gives a poor user experience, while others said that it could make it more likely that users will make it to the second set of results than previously.

Google My Business has added a new feature within the management interface that allows some listing owners to create a list of their services for each map listing.

This was announced in mid-April on the Google My Business Help forums. It is available in addition to the food menu editor that is available for restaurants.

The service menu can be created and edited from the Google My Business dashboard. The menu must be created in sections and items can contain a name, price and description. 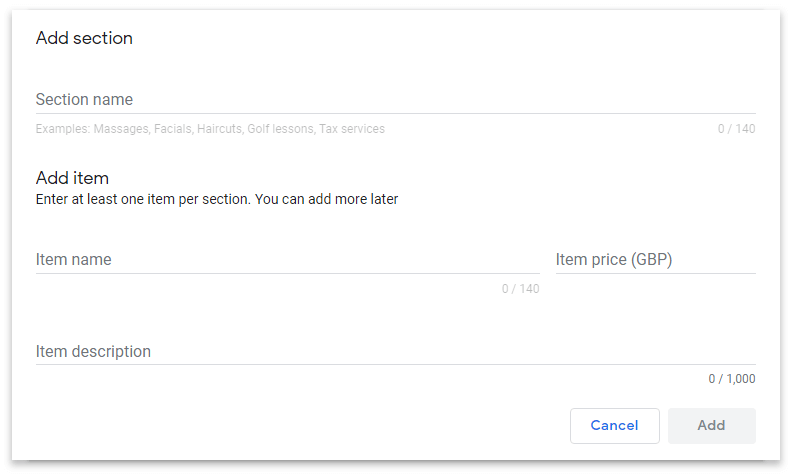